This recipe is one of my favourites.  An addictive stew filled with aromatic fennel, onions, spinach and tender squid.  The original version is from Clarissa Dickson Wright’s Potty cookbook.  For those of you who are too young to know, she was one half of the Two Fat Ladies: 2 eccentric and unapologetic cooks who created great (high calorie, buttery, salty, yummy) food on a BBC cooking show in the 90s.

I wasn’t expecting too much from this cookbook when I bought it – it seemed a little gimmicky. I was wrong.  The wide range recipes are delicious and easy.  I have not been disappointed with anything that I’ve made from this book.

Squid is a bit finicky to prepare – it has to be cooked low and slow (gentle braising) or hot and fast (grilling) otherwise it will be tough.

The recipe can be found at the bottom of this entry.

Ingredients gathered together and ready to be prepared. 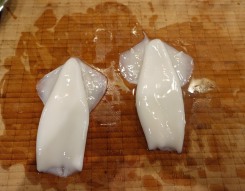 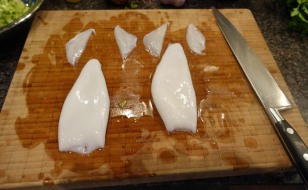 Cut the (already peeled and cleaned) squid into pieces. There is a cartilaginous structure just above the tentacles (in the middle of the last picture above) that is removed.

Everything is laid out prior to cooking. 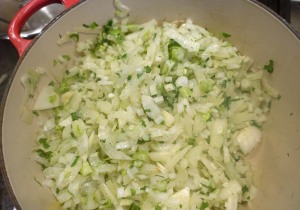 Fennel is sauteed in olive oil.  Onions, garlic, celery tops, parsley and fennel fronds are added before throwing in baby spinach (or kale).  The sliced squid and chopped tomatoes are added after the spinach wilts. 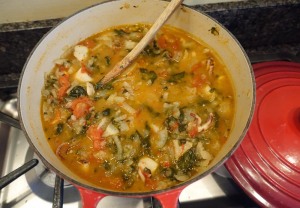 The mixture is slowly simmered until the squid is tender, about 40 minutes.  No fluid was added to the pot – all the liquid comes from vegetables.  Salt and pepper were added throughout the cooking process with the final tasting just before completion.

I can’t wait to reheat this later in the week with a few chunks of slightly stale bread.

One thought on “One Fat Lady’s Squid Stew”